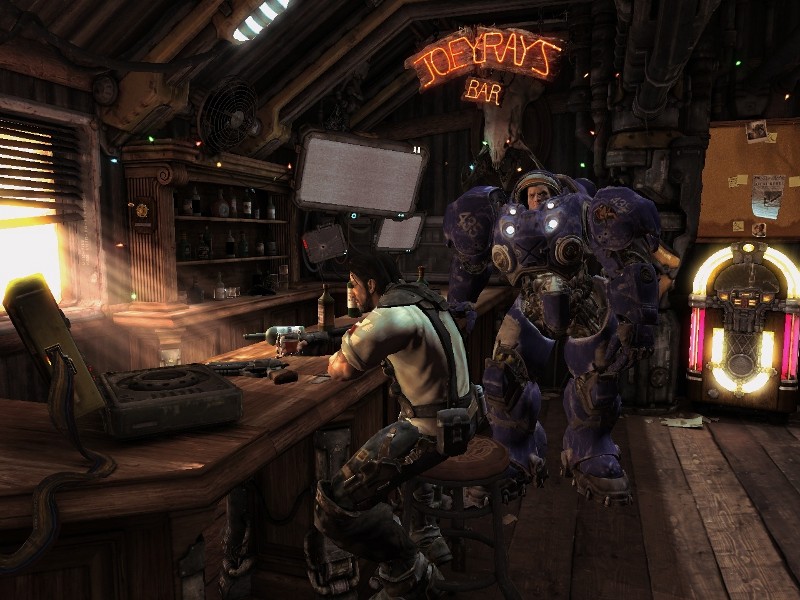 Like so many other tales, this tale starts with Phil, a young SCV operator, walking into a bar. This bar, identical to any other campaign headquarters bar, is the place where marines, technicians and pilots drown their sorrows and try to forget the horrors of their daily lives.

The bar is nearly empty. In a table on a dark corner a man with the body build of a soldier, full of marks and scars, fell asleep over the table. Behind the counter the barman clumsily washes a glass. Phil notices that the barman has two noisy robotic arms, and then sits next to the only client at the counter, a marine who is looking to the empty space while he drains his glass.

Phil calls the barman in a loud voice so that everybody can hear.

“Barman, repeat the dose to my friend here at the counter and to our colleague at the back. This round is on me!”

The barman smiles while he places two glasses on the counter, one in front of the young SCV operator and the other in front of the marine, and starts serving the contents of a bottle. The liquid is viscous, with a phosphorescent green color. When he is about to serve Phil’s glass, Phil smiles, placing his hand over the glass, and says:

“I will have just a drop-cola, thanks. I don’t want to arrive drunk at my first day of service.”

While the barman walks to the back of the bar to bring an extra dose to the sleeping soldier, the marine next to Phil raises his glass and slightly nods his head, in a discrete acknowledgement of the generosity of the newly arrived. With a naive enthusiasm typical of the young, Phil starts a conversation with the soldier.

“My name is Phil. I just graduated from the Technical Academy of Augustograd and today is my first working day on the field as an SCV operator”.

The marine drinks in a single gulp the green substance from his glass and shows a smile full of rotten, yellow teeth while he answers.

“My battle name is Wright, though you will have a hard time trying to find me in battle.”

“I am so excited about everything. I found out that being an SCV operator is my true vocation and I am dying to help on the war effort.”

Soldier Wright makes a gesture to the barman to fill his glass again, while keeping to smile at Phil.

“Are you sure you don’t want a shot? This is what helps me to survive another day out there.”

“No, thank you. An SCV is an expensive machine and demands a great responsibility from the operator. I can’t operate under the influence of alcohol.”

“Ok, that’s your loss”, soldier Wright answers while raising a small biscuit from a jar. “Barman, gimme some butter for my biscuit.”

While the barman spreads some blue paste of synthetic butter on the biscuit, Phil starts talking again.

“What are you drinking? Is it some sort of lemon or peppermint liquor?”

“Ha, we haven’t seen a lemon in Char for months. The trip is too long and expensive to waste with the transportation of anything that can make the life of the soldier any more bearable. You will learn that, in campaigns such as this, we are ‘encouraged’ to use any locally available resources in creative ways. For example, this drink is called ‘Baneling Bust’ and is a strong distilled beverage made from baneling poison. Way better than the vespene vodka, if you ask my opinion.

Phil drinks from his drop-cola and continues with his endless babbling.

“On the briefing I was told our mission is to end the zerg infestation in Char. I admire the courage you soldiers have to face these abominable creatures.”

“It isn’t courage, it is stupidity. My only consolation is that, though here the life expectancy of a soldier is really low, an SCV’s is lower yet.”

Phil’s smile fades for a moment.

“These are dirty wars. Yes, it is the soldier who pulls the trigger, but it is the SCVs that keep the war machine turning, if you get what I mean. The zerg and the protoss learnt that a long time ago, that is why they always go for the SCVs first.”

“The barman used to be an SCV operator before coming to take care of the bar after a forced retirement. His arms where ripped off during a stealth attack from the Dark Templars. Have you ever heard of them?”

“They are some freakin’ religion fanatics from the protoss. The bastards are invisible to the naked eye and slaughtered the barman’s team while they where gathering minerals.”

“I’m not finished yet. The barman’s legs were torn off during a roach attack. I don’t know if they taught you on the academy that the roaches can move buried in the ground as if they were swimming in water. The barman managed to hide while the roaches finished devouring his legs and slaughtering the rest of his team.

Phil looks down as if a roach was about to appear from the ground.

“Last but not least, his throat and half his face where severely burned during a raid of that stinkin’ Raynor rebels. They keep doing those raids to delay Emperor Mengsk’s military operations. Have you ever heard of the ‘Hell Drops’?”

“Don’t you worry, you will learn about them very soon. As you are going to learn that widow mines create widows on both sides of the battle.”

Phil can’t control his body, which starts to shake violently.

“But, how can you survive to so many dangers?”, asks Phil.

“You have to face the facts and admit that, in a war such as this, you either become a hero or you survive. In the real world the life expectancy of a soldier is five days. I stayed alive for so long because, how may I put this, I have sort of a fragile constitution and I am always recovering on a medivac.” While saying this, soldier Wright drinks another shot and discretely winks at Phil. “I have a pilot friend that always manages to avoid offensive missions. We have had a long lasting partnership.”

While Phil reflects upon what he has just learned and feels his expectations breaking apart, a soldier in his combat armour enters the bar. Soldier Wright waves to him and exclaims:

“Howdy, Hank! This round is on my new friend Phil!”

Hank’s helm’s visor raises allowing Phil to observe that he is infuriated. The barman starts pouring a ‘Baneling Bust’ dose when Hank grabs the glass.

“I don’t want Wright’s bloody drink. When I drink that trash I feel as if my stomach had been torn off by a hydralisk.”

“I want a golden minerals beer, and quick, because I have some truths to tell sergeant Crooks.”

Hank rises his cup, pointing it to Phil, and drinks with large gulps.

“Hank, I already told you, if you want to live a long fulfilling life you have to learn to stay out of the radar of our superiors, especially of assholes like Crooks.”

“Let me tell you what this guy did to me. The captain is planning a massive attack to the zerg hatchery but wanted to gather some field intel before that. He then told sergeant Crooks to send a patrol to capture the Xel’Naga tower close to the attack location. The sergeant bears me no love, so he told me to go alone.”

“You bet. I told him to send more soldiers with me. Do you know what that bastard told me?”

“He asked me if I knew the extremely high risk of taking the tower and asked me how could I be so selfish as to be wanting to put the lives of ten other colleagues in danger when I could easily risk only mine.”

“Yes it is. I just came for a drink and I am leaving right now to exchange some nice words with this asshole. I won’t allow him to force me into suicide.”

“Leave that girly drink and have some baneling juice, bro!”

Phil can’t control his shaking. The value of a human life seems to be really cheap in Char. In an attempt to calm down, he tries to change the subject.

“And how about Kerrigan? I never understood why do they call her the Queen of Blades. I’ve never seen her wielding any kind of blades.”

“Kerrigan, that bitch. It is an important part of my survival strategy to keep distance from her. People say she is too hairy and uses a lot of blades to keep shaven and protected from fleas.”

Wright laughs out loud and Phil is about to answer when he hears the loud noise of shattering glass and watches in panic as a zergling runs into the bar. The zergling jumps over the soldier sleeping at the corner, who lets out a violent cry as the creature bites off a great chunk of his head. A bang is heard coming from the counter, the zergling explodes in a cloud of blood and guts and the barman reloads his shotgun, which has a faint smoke coming out of its barrel. Phil had never seen a zerg so close. The barman, with empathy, smiles at him. The blood, the tiny pieces of brain on the wall, the destroyed carcass of that hideous creature deeply affect Phil. Soldier Wright observes the scene laughing while the empties yet another glass.

Phil is barely recovered from the shock when the intercom echoes on the bar. It is the synthetic voice of the adjutant, about to make an important announcement. “Warning to all soldiers and workers. An infiltrate zerg changeling disguised itself as soldier Hank was just found on the headquarters and promptly executed by sergeant Crooks as soon as it was discovered. The real soldier Hank was presumably killed by the zergs. Be wary of suspicious behaviour from your colleagues.”

“Poor bastard, I told him not to mess around with his superiors. Well, I have a medivac to catch. Phil, see you around.”

As he is getting out of the counter, soldier Wright drinks his last shot. Phil couldn’t keep track of how many there were. Frustrated and regretting having enlisted to work in that hell, Phil stares at the counter in disbelief. A glass with a green phosphorescent substance slides into his view. Looking forward, Phil sees the barman pointing to the glass with a smile in his face.

Phil thinks “Ah, screw it” and drinks the content with a single gulp. He pays the barman and prepares to leave when, suddenly, he feels a terrible pain in his stomach as if he had just swallowed a hand grenade. The pain is so terrible that he can barely walk. In a sudden moment of clarity, with whatever strength he has left, he asks the barman.

“Where can I find a medivac?”